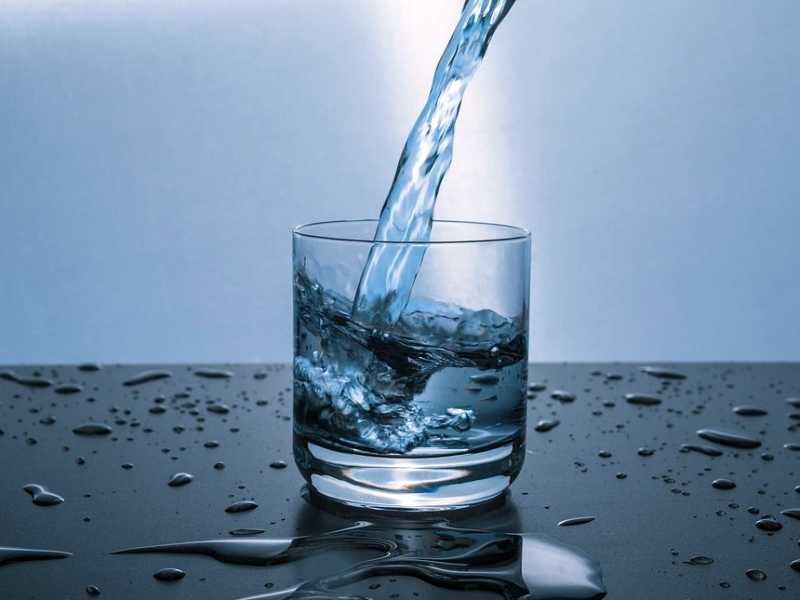 Our body consists of about 60 percent water and our brain even of about 80 percent.  We permanently lose water, through excretions, through breathing and sweating. Depending on the physical activity a healthy adult loses on average about 2.5 liters per day. This water loss must be replaced so the body can function. However, the need for water varies and depends, among other things, on the energy turnover, the ambient temperature, and the food that we eat. Everybody knows you get thirsty when you eat salty food. So how much water to drink each day?

Depending on their age, adolescents and adults should take in between 30 and 40 ml (1 ounce) of water per kilo of body weight per day. Of which we should drink about 1.5 liters, the rest we usually take through the food we eat.

How much water to drink each day?

Men should drink an average of 13 glasses of water a day and women nine glasses a day.

When exercising, the daily water requirement increases approximately to 40 – 45 ml per kilogram of body weight, which corresponds to a person weighing 80 kg already 3.2 – 3.6 liters per day. If training is still carried out at high ambient temperatures, the demand for water can increase further.

During pregnancy and breastfeeding, more water must be consumed.

Everybody knows the first sign of lack of water: Thirst. Ignore this, then you become very thirsty. If still ignoring to drink, then signs will include dry mouth and thick saliva, constipation, loss of appetite, and tiredness and fatigue. Confusion and mental deficits are also possible consequences. A lack of fluid is also reflected in a decline in physical performance.

Further signs of dehydration: The body excretes less urine than usual. In addition, the urine is darker colored.

A symptom of advanced dehydration: Pull up a fold of skin, on the back of your hand or on the forearm: When releasing, the fold should disappear immediately. If the skin fold only slowly disappears, you have already been drinking too little for some time.

What happens if there is a lack of water in the body?

Lack of water leads to serious health problems in the body. Urinary substances and bodily waste products cannot be excreted by the organism and are accumulated. The body becomes intoxicated by its own metabolic waste products.

In the worst case, a lack of water will result in circulatory failure. Not drinking water at all will lead to death in just a couple of days.

Special attention regarding the water balance in the elderly is required. With increasing age, the sensation of thirst often fades and people forget how much water to drink each day. It is not uncommon for seniors to be dehydrated.

But what happens if I drink too much water?

Water is indispensable for the survival of a human. Water is lost in the form of sweat, urine, and breath and needs to be replaced constantly. Symptoms such as fatigue, dizziness as well as muscle cramps may be caused due to insufficient intake of water. Similarly, excessive intake of water may cause water intoxication.

What is Water intoxication?

Water intoxication also known as water poisoning is usually the disruption of normal brain functioning from drinking too much water. What actually happens is the amount of water in the blood increases due to excessive intake of water. Water basically dilutes the electrolyte concentration of the blood, particularly sodium. A condition called hypernatremia arises when sodium levels fall below the required levels.

Sodium is the responsible factor for balancing fluid both inside and outside the cell. Imbalances in sodium levels cause the fluids to shift from outside to inside and henceforth, rendering the cells to swell. Sodium levels may fall due to excessive consumption of water. Moreover, this condition can damage the nerve cells in the brain and produce life-threatening complications.

The pressure inside the skull increases when the neural cells swell. It is only because of this pressure that the first symptoms of water intoxication are manifested:
Nausea, Headache, Vomiting

The fluid accumulation in the brain is termed cerebral edema. This, in turn, can affect the brain stem and cause central nervous system dysfunction. Moreover, medical conditions like brain damage, seizures, coma, and even death can arise from water intoxication.

It is also to be brought into the limelight that reports of deaths from excessive consumption of water have come forward. Most of the cases of death from water intoxication have been observed in soldiers. Their levels of sodium have been reported to be fallen and cerebral edema has also occurred. Water intoxication may also arise in various sports, particularly endurance sports. In addition to this, deaths from excessive consumption of water have also been reported in schizophrenic patients.

So we see, a well-balanced water household is most important for our body to function. It is imperative for your health to know how much water to drink each day and what happens if I drink too much water.

Hi, I am Sheena,
I have a passion for cooking and baking, as well as for science and conservation. My blog is about recipes and delicious dishes, and the science behind food and its production. I’m an Ecosystem Scientist currently doing a master’s degree in Food Science…….