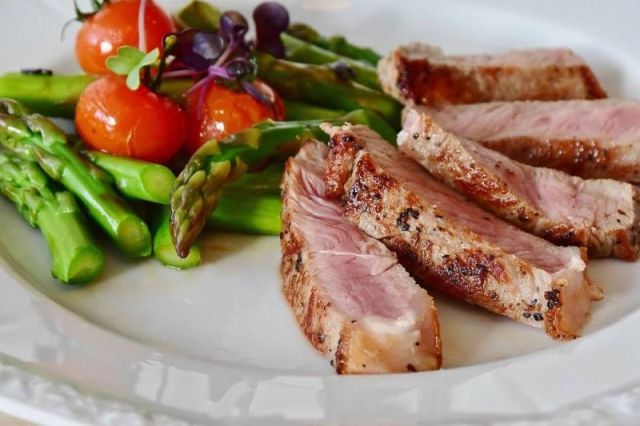 When heating food, many chemical reactions take place, things in it break down and change. Proteins coagulate or denature, carbohydrates gelatinize or caramelize. These processes always take place, regardless of whether the food is cooking in a slow cooker or whether a steak is sizzling in a pan. These changes in the chemical structure ensure that the meat develops good flavor and becomes edible

Cooking food can be done in many ways. Boiling, frying, baking, stewing, simmering. In all these processes, ingredients are changed and various chemical reactions take place, which makes many foods digestible for us.

In its raw state, some foods are tough and not very tasty. Some are not digestible, and a few are even toxic and must be boiled before consumption. After cooking, nutrients can be better and more effectively absorbed by the body.

The taste changes too when cooking. Flavors are very “delicate”, they can be destroyed when heated or unfold to the fullest. The right temperatures can be crucial for the success of a dish.

Meat can be cooked in different ways. The cooking method should depend on:

Meat consists essentially of water, fat, and various proteins. Proteins are large organic molecules made up of smaller molecules, amino acids, the basic building blocks of living organisms. Some proteins in the meat are organized as muscle fibers other are organized in connective tissue. The major component of connective tissue is a protein called Collagen, strong stuff that holds everything together, that’s how it got its name.

When the meat is heated, several chemical processes take place that changes its structure. Beginning at about 100 degrees Fahrenheit (40 degrees Celsius) Proteins begin to break apart, they denature. Muscle fibers begin to contract, connective tissue shrinks, cells break open and release water, and a cocktail of organic compounds that in their mixture create flavor.

How to Cook meat

Whether meat becomes chewy and tough, or juicy and tender, depends on the type of meat cut and on the method of cooking.

What causes meat to be tough?

When lean meat is heated, the proteins that make it up, begin to denature, the fibers contract, and the cell walls break open. Water bound to the proteins and contained in the cells is released and simply evaporates if the meat is overcooked.

Losing too much water lets the meat “shrivel up” and causes meat to be tough and dry. Lean meat with little fat and little connective tissue such as fillet, hip, or back should therefore only be cooked as long as absolutely necessary. The shorter the better.

How Meat Becomes Tender And Juicy

If it is a lean cut, cook it briefly as explained above, to retain as much water as possible. However, meat with a lot of connective tissue e.g. cuts from the neck, shoulder, and brisket, should be cooked as long as possible at low moist heat. Slow cooking or stewing is ideal. The connective tissue is made of tough collagen. At temperatures greater than 175 ° F, it slowly denatures to soft gelatin. The meat, which was tough at first, becomes a juicy delicate pleasure.

The Maillard reaction, named after the French naturalist Louis Camille Maillard, is responsible for the delicious crust and the wonderful scent of roasted or fried meat.

Searing meat at high temperatures can also be harmful. Sugars and amino acids react and form so-called heterocyclic aromatic amines that can increase the risk of cell changes. Do not char meat.

The myth of the sealing juices in

By searing meat, you can not “close pores” to seal meat juices in. Meat does not have pores, therefore there is nothing to seal. Only skin has pores. Searing the meat breaks cells, and water evaporates, drying out the surface of the meat cut.

The searing of a piece of meat does not seal juices in it only produces crust and flavors. The crust is dried-out meat with a glazed layer of caramelized sugars.

Sources and more to read: