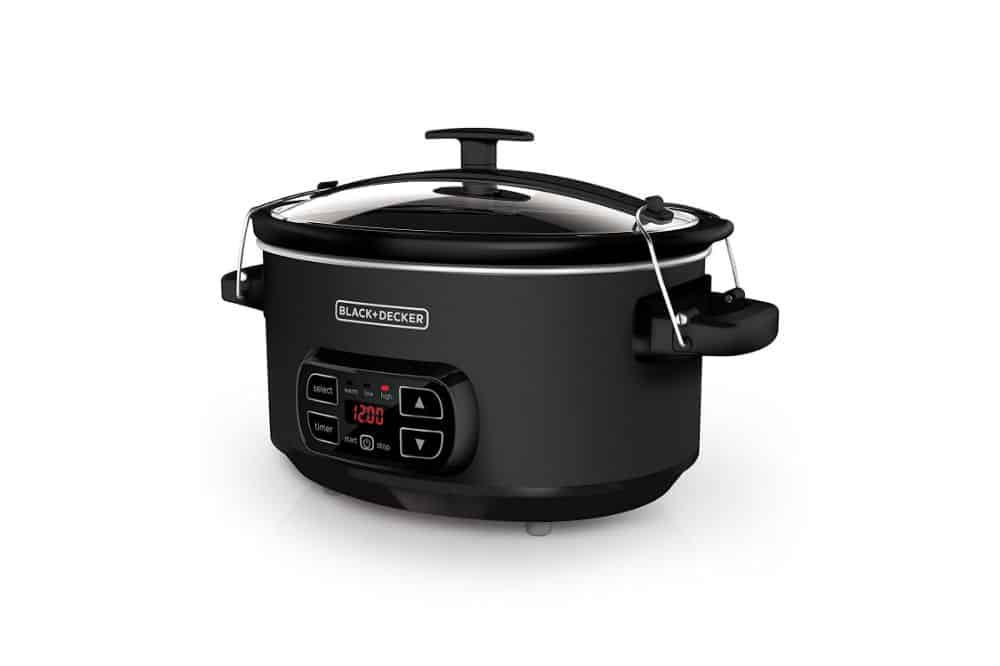 This post contains affiliate links. If you follow a link I may earn a commission at no extra cost for you. Thank you.

If you have ever had to transport a slow cooker filled with a delicious dish to a potluck or a birthday party, you know the problem: if you are not super careful, something will spill out of the pot or the lid will come off completely. But that doesn’t have to happen if you use a practical slow cooker with a latching lid. With one of those you just lock the lid so that you can safely transport the whole lot without spilling any of its contents.

Here are some popular slow cookers with locking lids in different sizes. Usually, there are only large models of slow cookers with a latching lid to be found, since smaller-sized slow cookers are really taken to parties or gatherings because they hold only food for a few servings. 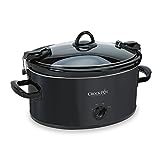 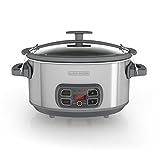 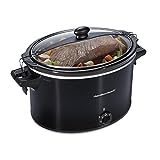 Why get a Slow Cooker With Latching Lid

Slow cookers are great for cooking up lots of food for a large crowd, especially the 7 or 8-quart models. So obviously when you are done cooking, you want to transport the slow cooker with the food in it, to the potluck or a family get-together without tipping it over or spilling any. A regular pot that does not have a latching lid needs you to be very careful during transport, you have to drive slow and be very mindful so that nothing gets spilled.

A slow cooker with a tightly sealed latching lid comes in very handy and is practical to prevent food from spilling during transport.

You can try with rubber bands or other tricks that the lid stays on and seals tight, but a slow cooker with a lid lock is really the best solution. These lids not only stay on the pot but also have a rubber seal in the groove so that the lid really closes tightly when they are locked so nothing gets spilled.

The lid is crucial in a slow cooker!

However, it is always tempting to take off the lid and to check the food, which is why slow cooker lids are usually made of glass so that you can see through it. However, since the lid acts as a barrier that keeps the hot steam in the pot, you have to be very careful in any case if you cannot resist taking a peek. Expect a cloud of hot steam if you lift the lid on your slow cooker.

With many lid designs, it appears as if it is sitting too loosely or doesn’t seal properly. However, this is completely normal and has nothing to do with poor quality. When slow cooking there is no steam pressure so it is enough if the lid sits loosely in the groove on the edge of the pot and allows the steam condensed on the lid to drip back into the pot.

Some of the large slow cooker models are equipped with a hinged lid or have a mechanism to lock the lid. This has the advantage that the slow cooker can be tightly closed for transport. The disadvantage of hinged lids is more time-consuming cleaning and, under certain circumstances, water that flows down to the rear when folded up and drips onto the work surface.

Why not open the lid when cooking

In order to heat something sufficiently in a slow cooker so that the food changes and becomes edible, one has to supply energy in the form of heat to it. This heat should remain inside the slow cooker, thus in a closed system so that slow cooking is as effective as possible.

But a good part of that heat is inevitably lost. For example, some of it is emitted into the room as heat radiation via the outer surface of the appliance. Some is lost in the form of thermal radiation via the liquid and food in the pot itself. The lid should retain as much of that heat as possible in the pot. However, the lid also becomes very hot and then releases energy into the room as thermal radiation via its outer surface. It doesn’t matter whether this radiation is emitted from the surface of the water or the outside of the lid, some will be lost.

So what does The Lid Do?

The lid is important because it helps that as much of the supplied heat remains in the system. Part of the energy supplied is used to convert some of the liquid in the pot into steam. When the contents slowly heat up, you can watch through the closed lid how steam clouds rise from the surface. However, it takes a lot of energy to convert water into steam. This energy is not lost in the process of evaporation but is stored in the steam.

As long as you leave the lid on the slow cooker, the steam can not escape and has to condense on the inside of the lid. The energy that was required to convert the water into steam is released again when the steam condenses on the inside of the cooler lid and the hot water droplets that form fall back into the pot and also bring the heat back.  The previously absorbed heat of evaporation remains inside the pot as the heat of condensation, the cycle is closed.

Of course, this only works as long as you leave the lid on. The moment you lift the lid, the steam escapes unhindered and takes the energy stored in it with it, and distributes it in the kitchen.

As long as the lid remains on, no steam can escape, and therefore no energy is lost. This type of heat cycle is also the reason why cooking in a slow cooker can be so energy efficient.

This closed-cycle slow cooker system is also the reason why the liquid level in the slow cooker does not decrease and you do not have to add water.