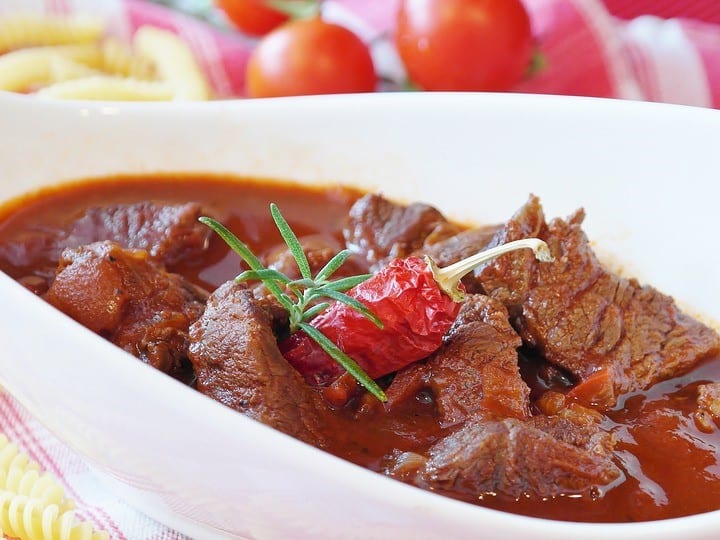 A slow cooker is an electric cooking pot for slowly cooking food at temperatures below the boiling point. Slow cooking at low temperatures requires much longer cooking times. Depending on the quantity, the type of food, and the selected cooking temperature, this can be between three to twelve hours.

Is a slow cooker the same as a Crock-Pot?

There are many companies selling slow cookers, one of them is “Sunbeam Products”. They own the brand name Crock-Pot® and call their slow cooker Crock-Pot. In fact, it is a brand name that originated in the 1970s when slow cookers experienced a revival on the market.

Crock-Pot® has sold millions of its slow cookers and they have been the preferred cooking appliances by lots of households in the US because of the convenience they offer.

The word Crockpot has entered the vernacular and many people use it when referring to a kitchen appliance that is slow cooks food. This brand name has over the years become a synonym in households when talking about a slow cooker.

So, is a slow cooker the same as a crockpot? Not really. A Crock-Pot is a Slow Cooker, but a Slow Cooker may not always be a Crock-Pot®.

How much electricity does a slow cooker use?

Due to the low temperature, the burning and overheating of the ingredients basically don’t happen. Another advantage of low-temperature cooking is the fact that much less electricity is consumed compared to cooking in a regular oven. For example, an average slow cooker requires less than half the electricity for the heating of a casserole as if the same would be cooked in a regular electric oven. Use this Energy use calculator

How does a slow cooker work?

Slow cookers usually consist of 3 parts: a base with a heating element built-in, an insert pot to hold the ingredients and pot lid. Slow cookers come in various sizes from about 1 quart to 22 quarts and with different energy ratings. Choose the right size for your dish and cooking requirements to cook economically with the lowest energy use.

Some models have digital displays and allow cooking time to be programmed, while some are entirely mechanical with just as simple control know to set the temperature either High or Low. A  simple slow cooker with 3 temperature settings is completely sufficient for many users.

What temperature does a slow cooker cook at?

Slow cookers warm up to a certain temperature to slowly simmer the food and keep this temperature constant over a long period of time. Most appliances have 3-4 cooking levels some also have a keep warm level.
Please keep in mind that the actual temperature will also depend on the level of food in the pot. Obviously, a crock with a  low food fill will become hot quickly and reach a higher temperature than a full pot.

Low: At this level, the temperature is at around 165 degrees F.  Quite a low temperature which slowly simmers the food, but hot enough to kill bacteria and germs. This requires the longest cooking times.

High: The ingredients in the pot reaches a temperature of 195-200 degrees F at this level. The food simmers well but it must not “boil”. Food is cooked and ready to eat at about 4/5 of the time at the Low level.

Medium: The food is cooked somewhere between “low” and “high”.  Select this level when the pot is not quite full or depending on the recommendation of your recipe.

Auto: In this setting, the slow cooker quickly heats up to High level for about one hour, after which the device automatically switches down to Low-temperature cooking.

Keep Warm: This setting is ONLY for keeping already slow-cooked food until you are ready to eat. At a keep warm temperature of around 150 degrees F, harmful bacteria can not grow well.
DO NOT cook in this setting, and limit keeping warm for about 4 hours only.

What size slow cooker is best?

For 1-2 person households, slow cookers with 1.5 to 3.5 quarts are usually large enough. For a family of 4 persons, slow cookers with 3.5-quart content are more suitable. Larger units are available but only make sense if you are cooking for a large group or for a party. Some people may want to cook ahead and freeze portions to conveniently have a quick lunch or dinner available.

But you should select the appropriate size slow cooker as cooking little food in a large unit is energy inefficient.

Some popular slow cookers have a built-in timer and programmable features. This may be a practical benefit for some kitchen chefs, as it allows the beginning of the cooking time to be set or the end of the cooking time to be set. It is practical too if you know you will be out and the pot is unattended. For this reason, it is most important to use a quality slow cooker that is really reliable and does not boil at 200 degrees when 165 degrees are desired.

Some Slow Cookers do also have a frying function, useful if you want to brown meat to add some roasting flavors to your cooking.

How to cook in a Slow Cooker

The principle is fairly simple: all the required ingredients are put in the pot, the lid is closed and the device is switched on. That’s it. Depending on the recipe, the food simmers in the slow cooker for a period of three to twelve hours at low temperatures. You don’t have to stir or do anything and best avoid opening the lid until the cooking is done. When the cooking time is over, simply serve and enjoy a tasty meal.